Its been a slow week.

Published by Aaron at 4/23/2003 12:49:00 AM
In a surprise announcement this morning, it was revealed that the Meek have inherited the Earth. The actual change of ownership itself happened three weeks ago, but the spokesperson for the Meek was too shy to contact the press. After much polite cajoling from fellow Meek Persons, the fulfilment of this ancient prophecy has finally come to pass.

A representative for the Meek gave us these comments - "As you know, the Earth was promised to us almost 2000 years ago by Jesus Christ himself, during his famous Sermon on the Mount. We have been Blessed for all that time, which was quite nice, but simply had to wait for the momentous event itself. The Earth and all it contains now belongs to us. By Divine Command, we Meek have absolute domination over the planet. We hope you don't mind". Blushing, she continued, "I know it's a bit of a big change, but it's really out of our hands. It's all a bit embarrassing actually".

The process of democracy has been rewritten to ensure that only the modest and passive are able to vote or run for public office. The first hiccup in this new system was caused when it turned out that no Meek people were planning to come forward as candidates. The most common reasons cited were "not wanting to cause a fuss" and "who would want to vote for someone like me anyway?". Assertive and confident candidates may have to be found in the meantime, until a truly Meek government can be formed.

Now that the Meek have inherited the Earth, what are they going to do with it? The Meek Affairs correspondent from The Times gave us this view : "The Meek have some very good ideas about tackling global problems. Unfortunately, very few of them are prepared to present these ideas to the international community, and when they do they tend to mumble so quietly that nobody can understand what they are saying. They really need to get assistance from some loud and pushy people, otherwise the fact that they are now the rulers of the globe is, frankly, going to pass completely unnoticed. The Meek need to stop being so acquiescent and submissive and get out there and kick some butt! Put plainly, they need to stop being so damned meek."

President Bill Clinton has already announced that he will be stepping down, to make way for the new Meek President, one Wilbur Cartwright. President Cartwright, described by his neighbours as "Nice and quiet, in an introverted and spineless sort of way", has used his first public statement to apologise to the United Nations for messing up their schedules, whilst shuffling nervously from foot to foot. The "Reluctant Dictator", as the press have dubbed him, is planning to run the affairs of state from his two-room apartment on the fifth floor of his cityblock, as the White House is "too grand for the likes of me". He has stated that he intends to have a telephone line installed in the near future.

When asked what their plans for the Earth are, the Meek are said to have timidly replied, "Umm.. we don't really know. What do you think we should do?"

News of the Inheritance is reported to have slightly raised the spirits of The Poor In Spirit. However, they are trying to remain as poor in spirit as possible, otherwise theirs will not be the kingdom of heaven.

Happy Birthday to Me 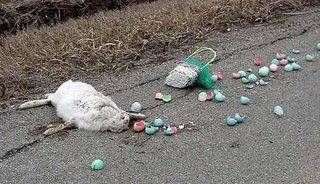